Running a Red Light May Cost A Life

The National Safety Council reported that were more than 40,000 traffic-related fatalities and 4.5 million traffic-related injuries on U.S. roads and highways in 2017. Data from the Insurance Institute for Highway Safety (IIHS) estimated that 132,000 of those traffic-related injuries were a result of red-light crashes. Red-light running is the leading cause for crashes in the United States. 1 in 3 Americans know someone who has been injured or killed in a red-light collision. Whether it be accidental or intentional, running red lights results in dangerous collisions, catastrophic injuries, and many deaths.

According to a study done by the American Automobile Association (AAA), the number of people killed by drivers running red lights has hit a 10-year high, which is a 28% increase in the past 5 years (since 2012). 2 people are killed every day in the United States by impatient and reckless drivers who don’t stop for signals.

The most recent crash data available shows that 939 people were killed by crashes involving red-light runners in 2017. Red-light running is responsible for 28% of crash deaths that occurred at intersections with traffic signals. Statistics show that nearly half (46%) of fatalities involved passengers or people in other vehicles, with more than 5% being cyclists or pedestrians. Just over 35% of those killed in red light crashes were the actual drivers who ran the red light.

The Rise in Red Light Runners

Last year, some 3.7 million U.S. drivers received a violation for driving through a red light. With technology advancing, many red-light runners have reported “accidentally” blowing through these traffic lights due to a distraction. Red-light running is often the result of distracted or aggressive driving and is 100% preventable. According to the National Coalition for Safer Roads (NCSR), more red-light running tends to occur during peak summer driving periods such as Labor Day, Memorial Day, and Independence Day.

Red Light Running Continues to be a Traffic Safety Challenge

Drivers who decide to run a red light instead of choosing to stop safely, are making a reckless and irresponsible choice that puts other road users in danger. Between 2004-2016, an estimated 10,125 people were killed in red-light related crashes.  The AAA Foundation’s latest Traffic Safety Culture Index found that 93% of drivers view red-light running as extremely dangerous, yet 1 in 3 drivers (43%) say they had blown through a red light within the past 30 days. 2 in 5 drivers said that they felt it is unlikely they’ll be stopped by police for running a red light. However, running a red light is against the law, and if a driver is involved in a fatal crash, they may be sent to jail.

While police enforcement is the best way to get drivers to comply with any law, it is impossible to police every intersection. The Insurance Institute for Highway Safety (IIHS) found that when implemented properly, red-light cameras reduced the fatal red-light running crash rate in large cities by 21% and the rate of all types of fatal crashes at intersections with traffic signals by 14%. While cameras are heavily opposed by commuters for their fines, when cameras are in place, the odds that the red-light violator would be caught are increased, which discourages violators from taking the odds.

Dallas, which housed 54 red-light cameras on 44 intersections, however, terminated its red-light camera program on June 1, 2019, when Governor Greg Abbott signed House Bill 1631 into legislation prohibiting the use of red-light cameras in the State of Texas. The program was meant to improve public safety through increased enforcement of red-light laws and increase public awareness of the dangers of running red lights. Dallas, Fort Worth, Irving, Plano, and all surrounding cities have since turned off their cameras and no longer plan to issue tickets. The decision to remove red lights has been a source of controversy in the research community. Some suggested that red-light cameras were also responsible for fender benders due to drivers slamming on their brakes at a red light. Methodologies used to assess the effectiveness have varied and divided officials who argued that the lights circumvent due process did not demonstrably save lives, and exist as a revenue generator.

Leon Valley (San Antonio Suburb) Police Chief Joseph Salvaggio, stated that moderate to major injuries went down 50% in Texas with the red-light program in place, however, in the first year of their program, the county still had 82,000 drivers run red lights. Data has shown that more than 80% of violators never get a second ticket. After Houston banned its red-light program back in 2010, fatal crashes in intersections rose by 30%, and overall crashes rose 116% according to data provided by the Houston Police Department. In 2015, Houston was named the most dangerous city for red-light running in the nation by the National Coalition for Safer Roads.

Texas has been known for some of the nation’s deadliest roads. In 2017, it occurred in Texas. In Plano, a city of about 300,000, there was an average of 16 traffic crashes a day before the red-light program was established in 2006. Plano Police Department stated that accidents were reduced by 1/3 with the red-light program. The debate in Texas was dominated by drivers who felt victimized by getting tickets. However, the actual victims are those who are injured due to red-light crashes, and the effects are pretty devastating. Typically, the accidents are high-speed and often deadly. Most red-light accidents result in “T-bone” collisions which is the front-into-side of the car. Put simply, in street safety, there is no fun answer. 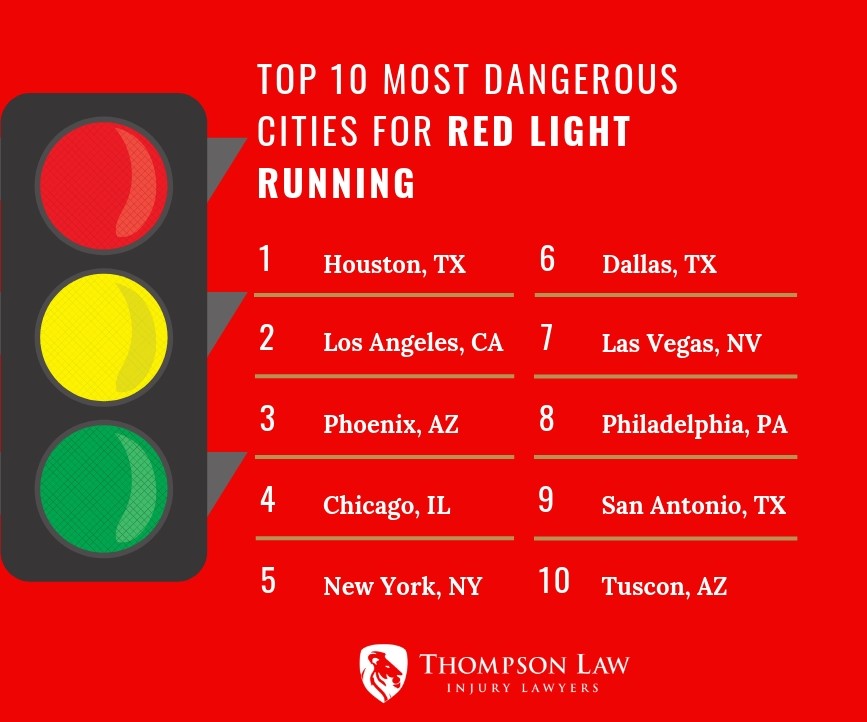 The Real Victims of Red-Light Crashes

Adrienne Patterson, a victim pedestrian struck by a red-light, was running while trying to cross an intersection in Austin, TX in 2013 and suffered a traumatic brain injury (TBI). Patterson testified before the Texas Senate Committee on Transportation against the bill on red light camera ban stating, “Traumatic brain injury affects anxiety, coordination, socialization, exhaustion, personality, relationships, ability to function, depression, seizures, confusion, headaches, decision-making, contemplation, emotions, and vision. These are a few of the things I deal with on a daily basis”

When a driver runs a red light, it is more likely to cause a significant injury than many other types of accidents due to the high-speeds involved and the un-prepared drivers crossing traffic that have a green light. “T-bone” or “angular” collisions often result in severe injuries and fatalities for the occupants on the side of the car that is hit. The front and rear-sides of the vehicle have significantly more protections that absorb the force of accidents, leaving passengers hit on the side more vulnerable with no
“crumple zones”. Small gaps separate the driver and passenger from a side impact, increasing the chances of catastrophic injuries.

At least 2 innocent lives are lost every day due to the impatience and recklessness of other drivers. Our car accident lawyers do everything in their power to protect our children, families, and community from the dangerous behavior of red-light runners.

If you’ve been involved in an accident with a negligent driver who ran a red light, you need the Lion on your side to fight for you! Don’t wait to get help. Thompson Law will get you set up with medical attention, even if you do not have health insurance and guide you through your road to recovery. Contact Thompson Law today at 844-308-8180 or on our online consultation form  to schedule a free consultation and discuss the circumstances of your accident and how we can help you!