A construction crane collapsed onto the Elan City Lights apartment complex in Dallas on Sunday afternoon killing one person and injuring six others. The news was confirmed by Jason Evans, a Dallas Fire-Rescue spokesperson. The crane sliced through four floors of the apartment complex, damaging most of its eastern side and the parking garage.

According to Evans, most of the crane incidents they’ve dealt with in the past involve a crane crashing on a vacant or under-construction building, thereby mercifully avoiding injuries. “This is a really challenging situation in the sense that I cannot personally recall that we’ve had a crane collapse that involved an already inhabited building,” he said in a televised news briefing.

Although the exact cause of the accident has not been established, Evans says the strong winds may have played a role in the crane’s collapse. Bigge Crane & Rigging Co, the company in charge of the collapsed crane, released a statement consoling the family of the deceased and everyone affected. “Our thoughts and prayers are with those directly impacted by this incident, families and loved ones, and with those who suffered property damage. We are mobilizing personnel to the site to find out more, and of course, to fully cooperate with investigating authorities,” the company said. 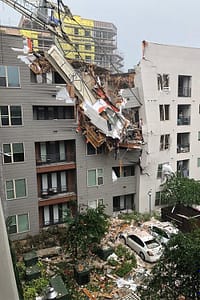 Data collected by the Federal Labor Statistics indicates that Texas has the highest number of crane accident fatalities. There has been a total of 40 reported crane-related deaths from 2011 to 2015 in Texas only. Eight people have been killed in crane accidents since 2012. Recent crane death statistics according to the Occupational Health and Safety Administration include:

Owing to the high number of fatalities due to crane accidents, OSHA inspected a total of 77 cranes in Texas. They found a total of 65 violations, most of which were due to willful, serious, or repeat offenses. To minimize the number of fatalities, OSHA issued a notice to the construction industry that crane inspections will be increased. Although the majority of crane accidents in Texas have involved construction workers, pedestrians and passersby are also at risk.

Most tragic crane accidents are caused by some of the following factors:

Proving liability in a crane accident

Although there is an inherent danger when operating equipment or when working in a construction site, this does not exempt injured parties from filing a lawsuit should they suspect that a crane accident was due to negligence? Due to the nature of most construction sites, several parties may share liability for property damage, injuries, or wrongful death caused by such an accident. Some of the parties that might be held liable for a crane accident include equipment manufacturers, contractors, property owners, and supervisors.

Crane accidents can be quite devastating with injuries that range from broken limbs, disfigurement, paralysis, lifelong disability or even death.

Your personal injury attorney will help you seek compensation for economic damages such as lost income, medical bills, and approximate expenses for future care. You may also be compensated for intangible damages, including pain and suffering and trauma.

Crane accident cases are quite unique, which is why you should consult an experienced attorney. After an obligation free case review, the team at 844-308-8180 will investigate, litigate, negotiate, and represent you should the case go to trial. Our experienced personal injury attorneys have a record of successful settlements and verdicts.