There’s a reason why dogs have been called man’s best friend. Approximately 42.5 million households in the U.S. own one or more dogs. As friendly and loyal as dogs can be under normal circumstances, they can be just as dangerous and aggressive under the wrong circumstances. If you or a loved one has been attacked and injured by another person’s dog, call our Dallas dog bite lawyers for a FREE CONSULTATION.

The problem is that not all dog owners are responsible, and therefore their dogs often go without the training and socialization they need for safe handling. Dogs are naturally protective and unpredictable creatures, and if they’re aggressive or frightened they can be downright dangerous.

That’s why Dallas dog bite victims and their families rely on the offices of Thompson Law to get them the compensation they need after a dog attack. Don’t accept a meager settlement from an insurance adjuster. Hire our Dallas dog bite lawyers to get to work on your dog attack case today.

Everything is bigger in Texas, including the number of dog bite attacks. In fact, Texas has a higher incidence of reported dog bites and deaths resulting from dog bites than any other state. In 2021, there were 5 dog attack fatalities reported in Texas.

Despite the fact that most dog bite fatalities are caused by pit bulls, Texas doesn’t have any legislation when it comes to dangerous breeds. Rather, it only classifies an attack by a dangerous dog as a Class C misdemeanor (Section 822.004. Attack by Dangerous Dog). That is particularly concerning given Houston and Dallas ranked as the 1st and 5th most common cities in the United States for dog attacks on postal workers, respectively. 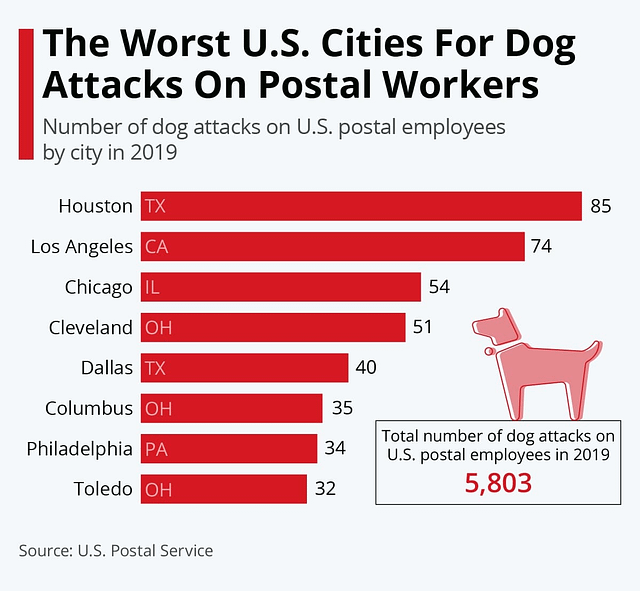 By comparison, in the United States, between 30 and 50 fatal dog attacks occur every year, with 65% of deaths being from pit bull attacks. Over 4 million Americans suffer dog bites every year out of a population of almost 330 million people (2020), leading to between 6,000 and 13,00 hospitalizations each year. That means that roughly 1 in 73 people in the US will be bitten by a dog each year. Scarier still, the number of dog attacks in the US appears to be increasing despite dog bite prevention measures.

Most Dangerous Breeds of Dogs

Some dog breeds are considered to be dangerous. Regulated breeds typically include the “pit bull” class of dogs but in many areas, these include a variety of other dogs such as American Bulldogs, Mastiffs, Rottweilers, Dalmatians, German Shepherds, Doberman Pinschers or any mix of these breeds.

Cities, towns and even landlords around the nation impose restrictions on such breeds. Breed-specific legislation (BSL) is the term that refers to the laws that regulate or ban certain dog breeds in an attempt to decrease the number of dog attacks on humans and other animals. 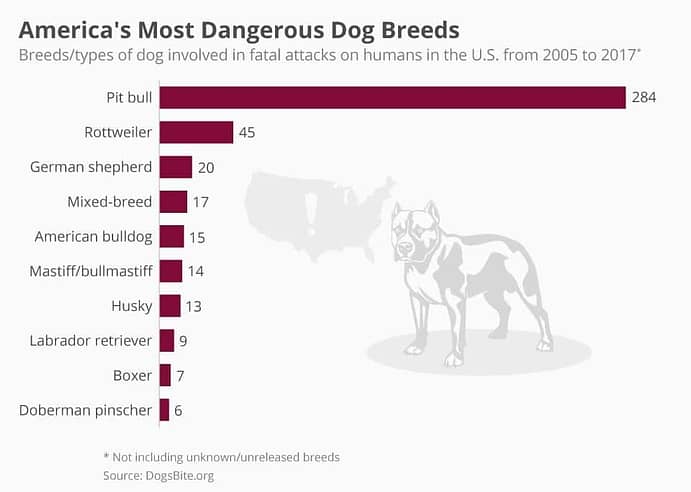 The “One Bite Rule” in Texas

Years ago, Texas had a one-bite rule that essentially gave owners a get out of jail free card, allowing their dog to have one free bite for which the owners weren’t liable. Fortunately, that all changed when the one bite rule was abolished in 2007.

Now, if any owner knows or suspects that their dog is aggressive, they are liable for any damages that occur as the result of their dog biting someone. If a dog attacks anyone, the owner is responsible for the victim’s injuries.

Other states have a “strict liability” policy for dog attacks, allowing victims to claim damages without needing to prove the owner’s negligence or prior knowledge of their pet’s aggression. This means that if you’re hurt and seeking damages such as medical expenses, lost wages or emotional distress, the offending dog’s owners are liable.

How The One Bite Rule Affects your Texas Dog Bite Case

However, in Texas, you need to prove that the bite was the result of the owner’s negligence. To prove owner negligence, you’ll have to provide proof that:

What to Do When a Dog Attacks You in Dallas, TX

If you’ve been bitten or attacked by a dog in Dallas, do not talk to the pet owner’s insurance company if they contact you. They’ll try to get you to accept a meager settlement or sign a statement. Doing that could sign away all of your rights in your dog attack case. However, there are a few things you should do to start building your case right away:

Compensation for dog attack victims typically comes out of the owner’s home insurance policy. As a result, the owner’s insurance adjuster usually calls victims advising them that they don’t need a lawyer. They’re not trying to do you a favor by offering a tiny settlement. They’re protecting their own bottom-line.

Potential Damages You Can Claim in A Dog Bite Case

Dog bite injuries can be both devastating and disfiguring. Sometimes, all it takes is for an untrained or vicious dog to become frightened or startled to attack. The damage done can be substantial. You could suffer from physical pain, disfiguring injuries, Post-traumatic Stress Disorder (PTSD), and anxiety as a result of your injuries.

Fortunately, the state of Texas allows you to claim both economic and non-economic damages. Your economic or financial damages are damages that you can prove with bills, receipts, or your employment record. These expenses include:

Your non-economic or non-financial damages are a little bit harder to prove. There isn’t any hard evidence to back them up and they tend to be subjective, depending on the victim. For example, a model who incurs damages to her face, or a pianist whose arms are incapacitated as the result of a dog bite might be more severely affected than someone who doesn’t rely on their arms or their face for their livelihood. Some of the non-economic damages you can claim are:

When you’ve been injured in a dog bite attack in Dallas or the surrounding areas your first call should be to Ryan L. Thompson and the Dallas dog bite lawyers at Thompson Law. Our veteran trial lawyers are ready to tackle your case and get you the compensation you deserve for your dog bite lawsuit. We know how to build a strong case with hard evidence to maximize the amount of compensation you’ll receive.

Call Thompson Law for a free consultation about your Dallas animal bite case so our Dallas dog bite lawyers can get to work for you today!